Yesterday was William Shakespeare’s birthday. I confess, I am not one who enjoys Shakespeare’s works. When I read Macbeth, Romeo and Juliet and Taming of the Shrew in high school, I had to borrow the equivalent of “Shakespeare for Dummies” from the library just so I could understand what I was reading. When I hear that he is considered one of the most prolific authors in history, I can’t help but furrow my brow and think, “Really? Him? I just don’t get it.”

Perhaps it is ignorance (or lack of culture) on my part. I want to like Shakespeare. Truly, I do. I would love to understand his sonnets and swoon over them. But the whole “doth” “thou” “mayst” “oft” “thy” parts throw me for a loop. Did they really speak that way back then? Or did they talk like we do now, and just wrote like that? Maybe he wasn’t the romantic that scholars claim he was…

Many businesses now seem to have the word express in their title. While the definition of “express” can mean precise and exact, the word is more commonly used to imply speed. (Take the “express lane” for example.) As schedules grow busier and people have less time, the idea of getting things – even difficult things – done quickly is appealing. The result of this is “express” being inserted into the names of certain businesses. But let’s stop and really ponder this idea of having services done expediently.

There is the Holiday Inn Express*. What makes this Holiday Inn different from the other Holiday Inns? Are their patrons awakened at 5 am by a Holiday Inn employee banging on their hotel room door shouting,

“Wake up! This is a Holiday Inn Express! If you wanted to sleep in you should’ve stayed in a regular Holiday Inn. Up and at ’em! Let’s move it along!”

Express Scripts is another well known business with express in its title. For the costumer, this name should evoke the idea of receiving your medicine quickly. No waiting. However, I can’t help but imagine a room full of pharmacists frantically filling little prescription bottles.

“Did you just drop Omeprilstatin?”

“No. I just dropped Methatrypophane. Why? Did you drop Omeprilstatin?”

“Crap. They look exactly the same. They’re both white and round. I can’t tell which is which. Now what?”

“I dunno. But the buzzer is about to go off any second and we need to have these boxed up. This is Express Scripts you know. ”

“Eh … what does it matter. It’s Express Scripts. NOT “You’re Getting The Right Medicine Scripts”. Let’s just pick them up off the floor, ship them out and hope for the best.”

Massage Express or Express Massage businesses have been popping up in various cities (typically in malls), which are basically poor quality massages given by individuals who have zero massage theapy training. What better way to relax, heal and unwind than to have a speedy massage given by a person who has no idea what they’re doing. But hey, it’s express!

On a local level, there is a business around here called Express Pools. I assume this is geared for people who – in the middle of August when they can not stand one more second of New York humidity – decide they want a pool and they want one now. Based on its name, I’m guessing a pool is quickly installed in your yard. However, haste makes waste, and I can’t help but picture people frolicking in their pool before pausing and saying,

“Wait. Wait just one second. Is it me, or does there seem to be less water in here?”

Express may mean fast, but it doesn’t necessarily mean quality. McDonalds or Burger King can promise you food quickly, but you’re not about to have them cater an important event. Five million tourists stare in wonder at the Sistine Chapel’s ceiling every year. Had Michelangelo been slapdash with his paintbrush,  it wouldn’t be considered the magnificent work of art it is.

Certain businesses know not to use the word express in their title, despite how much business it may potentially garner. Thankfully, I have yet to see Express Cardiothoracic Surgeons. I certainly wouldn’t want to drive over a bridge constructed by Express Bridge Builders, or fly on an airplane made by Express Made Airplanes. Lastly, call me picky, but my children would never attend Express Elementary School.

*So what exactly is the difference between a Holiday Inn Express and a regular Holiday Inn? The Holiday Inn Express is geared toward business travelers and has fewer amenities, such as an in-hotel restaurant or spa. They really don’t wake guests up at 5 am because it’s an express hotel (unless, of course, you want to be woken up at 5 am with a complimentary wake-up call).

The dogs sat on the couch. Talking dogs. Seriously. I had been asked to interview four talking dogs on a rather delicate subject matter. They wanted their voice (non-barking) heard, and they thought my blog would be the best venue. (Who knew canines read The Underground Writer? Who knew, for that matter, dogs could read?!)

Daisy is a mixed-breed. A cross between a Boxer and Pittbull. She shakes her head – her dog tags clicking together.

“Not mine!” the Golden Retriever interjects, “my humans are the best.”

“Well, of course you would think so. You think everyone is the best. All Goldens do.”

The Golden Retriever is suddenly distracted, his snout raised in the air, sniffing.

“Do you smell bacon?” he asks.

Daisy raises a furry eyebrow at me and leans forward, her front paws sliding on the slipcover.

“As I was saying … my humans adopted me from the animal shelter, which was great! I love them, really, I do. But now … but now they’re acting like they’ve saved the world! All over their minivan are bumper stickers that read ‘Rescue Dog Mom’ and ‘I Rescued My Fur Baby’ and ‘Don’t Breed – Adopt.’ As though taking me into their home has made them better people.”

Daisy glances at Trixie – a Yorkie who has started gnawing on an old running shoe.

“Then there are my humans,” Ace – a Siberian Husky – says. “Bought me from a breeder. Paid a fortune, I might add. Now it’s like I’m their kid. I have to go in their car all of the time. They call it ‘car rides.’  They’re always taking my picture with them. ‘Smile Ace!’ they say, ‘smile for the selfie!’ Apparently I even have my own Facebook page – whatever THAT means.”

“I love going for car rides!” says the Golden Retriever, “My humans have a bumper sticker that says their dog is smarter than your honor student … what does that mean?”

“So what exactly is the problem?” I ask, “Daisy, you would rather have been left in the animal shelter? And Ace? You have a problem with being so loved?”

The dogs (except for the Golden Retriever, that is now licking his genitals) all shake their heads.

“I told them not to hire The Underground Writer for this!” Daisy hisses.

“The problem,” Trixie says, after she has swallowed a tattered shoelace she managed to dislodge from the running shoe, “is how the humans view us. My great grandpa Oscar used to tell me about sleeping outside on the back porch, or eating table scraps. Now I sleep on some fancy thing called a ‘dog settee’, and my human buys me organic dog food.”

“Speaking of food,” Ace interrupts, “have you seen what they feed us? What happened to meat? I like to eat out of the garbage can whenever I get the chance.  And if it’s really smelly, I like to roll in it. Now, my humans feed me froufrou stuff they think will taste good.”

As if to prove his point, Ace nods towards the packages lined up on the table next to the couch. 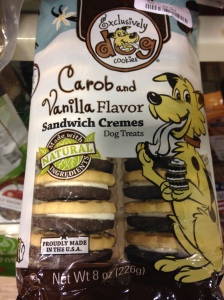 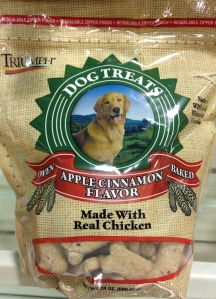 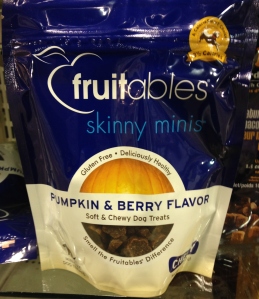 “Pumpkin and Berry flavor? Gluten free? I just want a bone with some ham still on it!” Ace starts to drool, his saliva forming little pools on the slipcover that is now coated with dog hair.

“It’s like … humans are trying to make us human,” Trixie says.

“Human are trying to make dogs … human?” I repeat.

“Don’t get me wrong,” Trixie continues, “I do love my humans, especially the kids. But sometimes I think the adults forget that I’m a dog.” 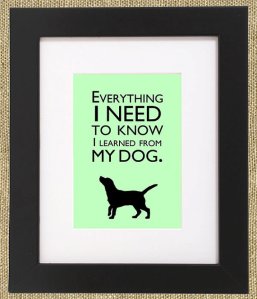 “I think that’s great,” the Golden Retriever says. He is scratching his left ear with his hind paw. “I can’t wait to teach my humans how to fetch, and sniff stranger’s crotches, and beg for apple cinnamon flavored biscuits.”

“Everything I Learned In Life…” picture: Google Images/Etsy.com